“There’s nothing quite like a Holden”.  How true,  yes I’m a bit one-eyed but I have been that way from about the age of five when my father used to let  me steer the FX Holden and nearly every model thereafter, up to the VL.  I’m sure, if they drive Holdens at the Pearly Gates, then he still has one!

Anyway, I was offered  my EH Holden by a close friend, as her father was too old to drive it any more (about ninety years old!).  He had had it since new and they would like to see it restored, keep in contact on its progress and not sold.  All conditions so far have been met.

It was located at Berry Creek, near Warragul in Victoria, on their farm.     I flew down there to pick it up as I was told that it was last driven only twelve months or so ago.  So theoretically, just turn the key and go!  Wrong!  The car was stored in a chook shed, (no bull),  just like those ads you see with the straw, chook droppings and so much dust on the supposed treasure. (You check your sanity at being into this hobby.)  Well, let’s get this show on the road. An early start was planned for the next day to drive it back to Canberra  (the car was still registered).  Turn the key…… flat battery,  the battery is dry and stuffed; apply the brakes…. pedal goes flat to the floor,  lost all fluid;  rear brake slave cylinder leaking;  radiator…. empty;  front mud guard ….half hanging off due to rust; one tyre completely flat.  “John, you have a big night ahead of you to get this car roadworthy,  if you want to get home.”

So get you’re a*%#  into gear.  In to town to purchase a battery, brake seal kit, fluids and a tyre pump.  After about six hours of work,  a bit of fuel down the carby, a turn of the key and away!  The mighty 179 fired. Off for a test drive.  All went well.

I could see George (the owner)  wanted to have a ride, so I went one better and offered him a drive.  The old guy was all smiles as he sat behind the wheel again and off we went……… until the first corner and he was unable to negotiate it and ran up the embankment and we got bogged.  Tears came to his eyes and his words were, “I guess I’m too old to drive, it’s all yours.”   His son-in-law came to our rescue in the 4WD Toyota to drag us back onto the road.  He then tells us how good the ‘rice burner’ is, (we would like to see it in forty years time!)

The trip back to Canberra was uneventful, but one thing was on my mind…………… George told me how his farm was lousy with snakes;  Could a snake have made my new acquisition his home? ………………… Well, if one appears, the driver of this car will have brown underpants & a walk back to Canberra.

I was soon into the restoration, strip paint, wash parts, cut out rust, and rebuild.  I was enjoying it as parts came easily, plenty of information available and no upholstery work required as it was well kept.  The drive chain only wanted the seals and gaskets replaced.  The brakes were fully overhauled.  Painting was another learning curve,  as I have never fully sprayed a car.  I look at some cars now and I could have done better,  but it’s all in the eyes of the beholder I guess.

It is a great enjoyment to take on club drives.  We have had six adults in it at one rally and it was like the good old times going to the drive-in. (I can’t name the club members in case it incriminates me or the comments in the back seat).

That’s my story about the Holden legend that just keeps on continuing.

On tour around Tasmania Feb/Mar 2015 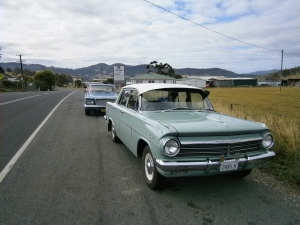