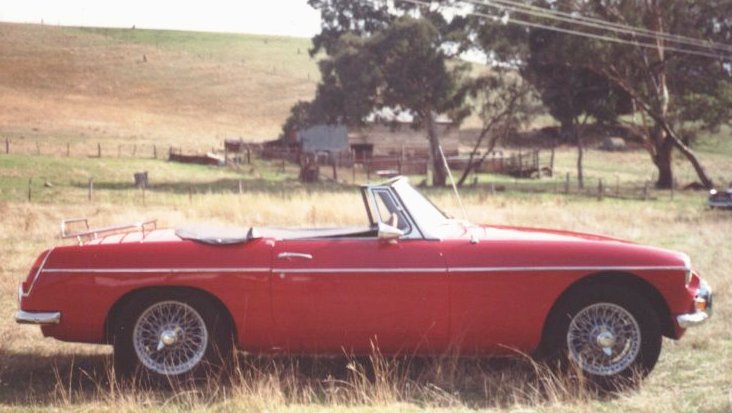 It is hardly surprising that I contracted the disorder.  The warning signs were there; Sunday afternoons of old Elvis films, leafing through copies of Just Car and my family history didn’t help – you could say that it was a genetic disposition.  I was sixteen when I saw an Austin Healey bug-eyed Sprite on display at the Queanbeyan Show – I knew then that it was incurable.  I was hooked, and I couldn’t be happier.  This was to be the backdrop of what would become a lifetime passion – classic cars.

I then put my mind to getting my own classic car.  I mentioned my fondness for this sleek little number to car enthusiast who suggested that if I was that way inclined, I may like the MG.  I was assured that it was a gutsy little number.

I left school at eighteen to commence an apprenticeship in bookbinding, and I started saving.  In my spare time I would leaf through Classic Car magazine and yearned after the cute little B, it was true love.

In 1997 I had completed my apprenticeship and decided that this wasn’t for me, and decided to go to university.  This was a defining moment; I quit my job, enrolled in university, and set about buying a sports car.  I am sure that my parents thought that I had lost my mind, or I was having some sort of early mid-life crisis!!

To demonstrate that I was serious I started my research.  I went out with the MG Car Club and talked about the pros and cons of different models and common problems to look out for.  For the first three weeks my Mother acted like I was joking.  I was continually warned about the insurance on a sports car, especially for a person under 25 – unthinkable!  I decided to put an end to the debate, and dropped in on the Snowy Mountains Credit Union with whom I had my everyday car insured with, to get a quote.  This was the turning point.

“I would like an insurance quote for an MG.”

“Well, I don’t have one yet, my Mum is on my case about insurance.”

As it turned out, the manager of the Credit Union was a Jaguar man, and he just happened to know a guy………….

I had two criteria:

This one was both.  It was a 1967 Mark I, this meant that it didn’t have synchro on first but being a later of the Mark I’s it had the five bearing crank.  It was temperamental to start, but all I could see was that this little car needed someone to love it, and that someone was me.

The owner, Don Barnby lamented selling the car, but he had put it on six-month registration for the third time, and this was the limit in the ACT.  Don had also found another love – a later model MG painted a vivid Nissan Blue.  Don seemed wary that as a young female that I may be a tyre kicker.  A prompt word from Dad reassured him that I was the real deal, and would a bank cheque tomorrow be OK?

The cheque was all the money I had, and I was exuberant.  Who says that money can’t buy happiness?

I named her Cherie.

I was not due to start university until the end of February, so I had a few languid weeks of washing, cutting and polishing; and bonding.  In this time I painstakingly cleaned the matt black paint from the front grill to reveal shining chrome.  The same paint had been applied to the windscreen wipers, they were steel.  I am told that the matt black was very fashionable in the 1970s, but I still don’t understand it.

An ongoing problem was ignition, if she didn’t start first go – I would be there for half an hour.  A trip to the Dunster brothers in Mitchell fixed this problem.  Apparently, it was common for resistors to be fitted to the plug leads to reduce radio interference; my poor Cherie had one on every lead!  The resistors were doing too good a job!

Since then, it has been a dream of picnics, Sunday drives and country towns.  I have had Cherie now going on eight years, and she has needed little work.  A new radiator a few years ago was the most significant work.  I love the car as much now as when I bought her.  The only difference is that now I have a hubby who I have to fight for the keys!  Nowadays I have taken a more relaxed approached and let him chauffeur me around the countryside.

I am thankful that Paul loves classic motoring as much as I do, and that my Dad encouraged my tinkering with a set of screwdrivers for Christmas.  I am happy to be a part of a great supportive Club and a special thank you to Ian McLeish for letting me garage Cherie at his house while Paul and I housesit and save for our own eight car garage with a kitchen and bathroom!

Here’s to many more great outing with our four wheeled friends (or two or three wheels in some cases!)