Article and photos by Pam and John Corbett.   Additional photos by Steve Cole.

‘Bonnie’ is one of 22,155 Ford V8 Pilots made between 1947 and 1951. The Pilot was the first large post-war English Ford. It was based on a pre-war 22 hp chassis, and was initially offered with the 2227 cc side-valve engine from the 1939 model.  The car was evidently seen as rather old-fashioned even at the time, but its front brakes were hydraulically-controlled. The rear brakes were rod-operated.

Most Pilots were four-door saloons, but Estate and pick-up versions were produced, the latter for the export market only. The front windscreen could be opened for ventilation pivoting about a top hinge. Production ended in 1951 when the Pilot was replaced by the Ford Zephyr.

Like other Fords of the era, the Pilot used vacuum-driven wipers taking their power from the engine manifold; as a result they tended to slow drastically or even stop when full throttle was used under load. The car was reputed to be capable of 80 mph (130 km/h) and have a 0 to 60 mph (96 km/h) time of 21 seconds and return 18 miles per imperial gallon (16 L/100 km; 15 mpg-US).

Importation and local semi-assembly of the Pilot (along with the 1949 US Ford V8) by the Ford Motor Company in Australia in 1949 was essential in countering the retail sales of the new government-financed General Motors-Holden’s ‘Holden’ which began in February of that year. In fact the Pilot was sold new in Australia until well into the 1950s. Such importation (along with that of the Ford Prefect and Anglia) was essential in maintaining a presence in that country after a refusal by the then-Federal Government to provide any direct financial assistance to produce a local car (this despite Ford providing a more detailed and comprehensive proposal than GMH, and despite the fact that many millions of pounds had been invested by Ford US in Australian vehicle assembly plants since 1925). Queen Elizabeth’s father, King George had a Ford Pilot and it is still in the Royal Family’s collection. The Pilot was his favourite.

Ron Smith enjoyed many hours in his youth with Ford V8’s. So when he found ‘Bonnie’ at a property near Kiama NSW, he was keen to relive some of those moments by restoring her to her original condition. He enlisted the aid of a fellow club member Hugh Spencer and they both went to collect her.

Bonnie’s restoration took 12 months to complete with her maiden run being down the Great Ocean Road.

The only hiccup being remnants of a rat’s nest coming through the fuel filter.

Ron enjoyed many runs in ‘Bonnie’ and she is now in the safe custody of his nephew James Corbett. 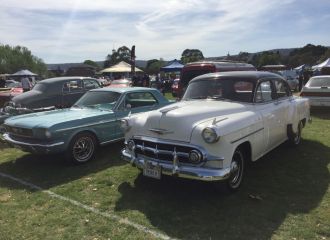 THANK YOU TO OUR SPONSORS               LINK TO Renewal of Membership for 2020-2021 Welcome to Southern Tablelands Heritage Automotive Restorers Club’s presence online.…